Early Birders had a very interesting time. Graham led us to site of the tragic plane crash in 1966 where three people lost their lives. No signs of wreckage remain but broken-off trees and scarred limbs were a potent reminder of that event. We walked past the crash site along a Forestry track, with a deep gully on one side and hoop pine thickly undergrown with Gahnia sieberiana.

Someone said, “With all that Gahnia, there should be a Swordgrass Brown butterfly”.  Immediately, about 30 yards away, two brown butterflies flew straight up out the green mass, fluttered tauntingly and dived back down within seconds. During the day, several of these butterflies were seen, some very dark, which accounts for the name - Varied Swordgrass Brown. Gahnia species are their food plant.

We saw many birds, including a much-debated Flycatcher. Some were hoping for the rarely seen Satin, but it was a Leaden Flycatcher. Cecile explained that one way to tell them apart, if you are below, is the curve of the black-white boundary on the upper breast. Leadens have a more upward curve, like a smile.

The track led to a gate where there was a striking Golden-headed fly. Later, posted on Facebook, Cam’s picture led to much discussion as to its exact ID.  See https://www.brisbaneinsects.com/brisbane_tachinids/Rutiliini.html

The early birders then went on to meet up with the second group.

Bev’s report:   On a fine September morning a good crowd turned up to walk the Boronia Trail on Harry’s Hut Road. It was a pleasant walk through wallum woodland and rainforest, ending at Kin Kin Creek.  The only obstacles on the trail were a few trip hazards, lawyer vine (Calamus muelleri) ready to ensnare us and supplejack (Flagellaria indica) reaching out with coiled tendrils. We could be forgiven for expecting wildflowers for actually they were scarce, though there were good clusters of Grass Trigger Plants (Stylidium graminifolium) and Guinea Flower (Hibbertia vestita). I was excited to see Apple Berry (Billardiera scandens) and Broad-leaved Geebung (Persoonia cornifolia) in flower.

Prolific was the dark leaved Scrub Cherry (Exocarpos latifolius), parasitic on the roots of nearby trees.
Comments on the identification of this persoonia appreciated.  Is it  cornifolia or sericea?
When we arrived at Kin Kin Creek, Graham filled us in on the story of the bridge which had once existed here and remnants of which were still visible.

As previously you could not get across the creek, the old suspension bridge was built on the walking trail from Elanda Point to Cooloola by the Army in about the Eighties, as an exercise.   A big flood in 1988 came through and washed the bridge away.  Now all that is left is the structure on one side of the creek that supported the suspension.

As for fauna there was a European bee hive in a tree hollow,and evidence of bandicoot or echidna diggings along the trail.

An old tree, along the trail, presented an interesting visage due perhaps to trunk and limb damage in the distant past.

A female Orchard Swallowtail butterfly put in an appearance.We adjourned to Harry’s Hut day use area for lunch and our meeting. It was good to see the area was recovering from last year’s fires.

On the way home we called in to the Boronia keysii Scientific Area and were delighted to see the vulnerable boronia thriving and flowering. There were also masses of the beautiful Boronia rivularis. 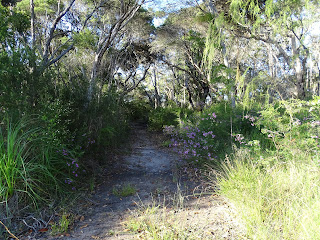 Many thanks to Ernie for IDing plants and to Wendy and John for help with organising the day.

Posted by Field Nats Fantale at 13:07 No comments:


Our arrival on Heron Island on October 18 till 23, coincided with the nesting season of the White Capped Black Noddy Tern, Anous minutus  which arrives to breed on the coral cay islands from October to January.   Normally 30-70 thousand pairs breed on the island, but have had up to 120 k pairs.  The preferred nesting tree is the Pisonia tree which only grows on coral cays.  Every tree had multiple nests. The Pisonia tree has an unusual relationship with the terns in that at the end of the nesting season in January its seeds become very sticky and trap some terns and other birds to the extent that they can no longer fly and starve to death only to serve as fertiliser for the hungry trees.
The Noddy nests are a very rudimentary structure of  dead Pisonia leaves and bird poop,  The males collect leaves and present them to the females for consideration.  She may accept or reject the leaves by dropping them.  Some males have found that dipping the leaves in sea water makes them more acceptable. The Noddys generally raise 2 chicks one after the other.  If the first chick dies the female divorces the male and finds another mate for the second attempt.

Also nesting on the island at this time is the Wedged Tailed Shearwater Puffinus pacificus which nests in burrows about 2m long all over the island.  At night you need to watch where you tread as they tend to lay outside of the burrows and are easily trod on.  The vision of the shearwaters is like polarised sunglasses and this makes them almost blind on land at night.  Together with rear positioned legs they are prone to bump into trees etc when coming in to land at their burrows.

The common nesting Tern is the Bridled Tern Sterna anaethetus  a ground nester.

Most of the birds simply ignore you as you pass or hop a meter out of your way.

Less friendly are the Eastern Reef Egrets Egreeta sacra  who tend to have a wider comfort zone of 3-5m.  Both the light and dark forms are present in large numbers and are also nesting at this time and have large hungry chicks.  The chicks are not friendly to each other and generally only one will survive to fledge.

The Buff-banded Rail Gallirallus philippensis is very common on the island and have distinct defended territories in which they lay up-to 11 eggs, but usually only one or two will survive predation by the Egrets and gulls.  The mothers are very protective but are unable to deter the hungry Egrets.

This is a distinct Barrier Reef island form, yellower above, whiter below.  It does not interbreed with the more common Zosterpos familiaris which occurs in eastern Australia as far north as Rockhampton.
The Ruddy Turnstone were in non-breeding plumage.
Grey-tailed Tattlers breed in Siberia.  When feeding, they dart about bobbing and teetering between runs in their search for crabs, mollusks, sometimes fish.
Pied Oystercatchers mate for life and are unable to survive as a single bird.
The Brown Booby is a bird of the tropical oceans and ranges, in Australia, from Brisbane north to Dampier in Western Australia.  They prefer to roost on solid objects and nest on the ground.  This particular bird had lost its mate.This tern breeds in colonies on rocky islands and headlands.

During a walk at dawn on the beaches, you will find laying Turtles both Green Chelonia midas and Loggerheads Caretta caretta.   More often one just finds tracks as most turtles have returned to the sea by daybreak.

Green Turtle track up the beach.

A female Green Turtle returns to the relative safety of the water.

Very common around the jetty and shallow reefs around the island.Manta Rays are classified as Vulnerable, largely due to overfishing.  Other threats include climate change, sediment run-off, pollution, rising sea temperatures.Frequently seen while one is enjoying walking on the reef.
Many types of coral can be seen during the glass-bottomed boat cruise.  Identification remains elusive. 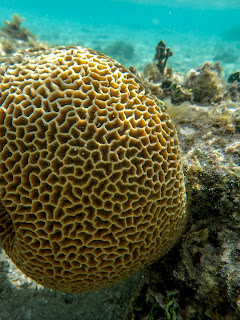 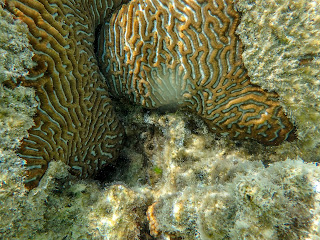 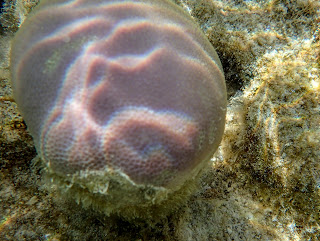 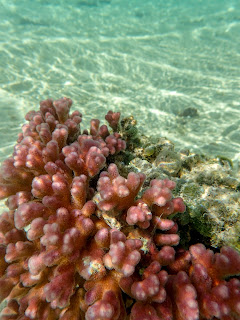 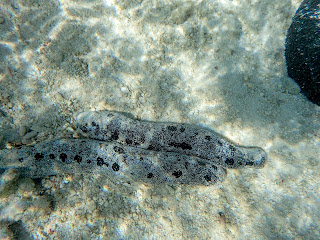 On 19 June 1884, HMCS Protector was ready for service. In July 1943, en-route to New Guinea for service with the US Navy and off Gladstone, she was damaged in a collision with a tug and abandoned.  The hull was taken to its present place at Heron Island and later sunk for use as a breakwater.Text & Photographs: Ian Smith

Posted by Field Nats Fantale at 22:09 No comments:

This site is to keep members up to date on what's happening with the Club, including outings, meetings and general news.
Please bookmark this site and check it regularly. We will try to update often with some of your great photos and related articles we think might be of interest.
Please send us an email if you have something you want us to publish - linouir12@gmail.com